With hundreds of lithographs, watercolours, linocuts and newspaper drawings, in Galleri Dagfinn Bakke you can take in the vast range of this famous Lofoten artist’s production.

«I convey experiences from nature. I perceive the scenery in all its facets, the drama, the changes, the forces.»

Thus, Dagfinn Bakke chose to describe some aspects of his art. If you visit the gallery in Svolvær, you will soon see what he meant by those words. Here your eyes will be treated to stunning watercolours depicting the Northern Lights, gloomy paintings from the months of darkness, poetic mountain ranges and bucketloads of raunchy humour – offering you a rare opportunity to get acquainted with Northern Norway’s scenery and character.

Dagfinn Bakke (1933-2019) is regarded as one of the region’s most distinguished and prolific visual artists. He has had numerous solo exhibitions in Norway and abroad, having been purchased by the National Gallery and Riksgalleriet amongst others. He has adorned several public buildings as well as numerous Express ships. During his 30 plus years as a newspaper illustrator he produced more than 30,000 drawings, and he has illustrated more than 100 books.

In Galleri Dagfinn Bakke, which was founded in 1983 by Dagfinn and his wife Mary, a considerable part of the artist’s work has been collected. Today, the gallery is run by their son Einar Bakke.

The gallery has a well-equipped frame shop and small book shop.

Did you know…
…Dagfinn Bakke illustrated all the books about Oluf Rallkattli, written by Arthur Arntzen?

Galleri Dagfinn Bakke is in the centre of Svolvær, about 100 meters from the Express ship quay.

Svolvær is the largest town in Lofoten, with a rich variety of shops, shopping centres, cafes and restaurants.

A stone’s throw from the gallery you’ll find the North Norwegian Artists Centre and Lofoten War Memorial Museum. Close by is the Lofoten kulturhus, which regularly hosts concerts, festivals and other performances.

There is no shortage of options when it comes to enjoying the majestic scenery here in Svolvær. The area is ideal for cycling or kayaking, whether you intend on bringing your own or hiring from one of our rental services. 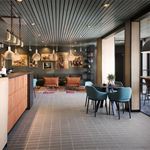 Distance: 249 meters
A destination hotel in beautiful surroundings for active people who want to enjoy a good night’s sleep in a comfortable bed. Scandic Vestfjord Lofoten is located on the quay in the center of Svolvær, with mountains and the sea as its closest neighbors.
Book 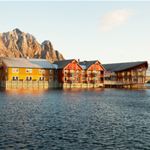 Distance: 453 meters
Welcome to Scandic Svolvær - situated on the docks in the city centre of Svolvær - the Capitol of Lofoten!
Book 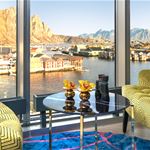