The bakery at Å

The bakery was built in 1844. It is fully operative as a "demonstration bakery" during the summer season.

The Bakery (Gammelgården - the Old House) The bakery was built in 1844 in the typical Trønder and Nordland styles of architecture, with the windows just below the eaves. After the fire in 1888, the building was rebuilt in late Empire Style with a gabled slate roof. The building has been listed as a historic monument by the Central Office of Historic Monuments. Visiting workers here during the fishing season were housed here, together with the servants. On the ground floor there is a bakery which has been preserved just as it was during the first half of the last century. The bakery is fully operative as a "demonstration bakery" during the summer season and fresh bread and cinnamon rolls can be purchased there every day - and at the same time, you can see just how they were baked in the old days. 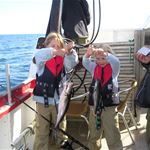 Distance: 31.6 km
Sjøstrand Rorbuer ,Børge Iversen AS Accommodation in Rorbuer and our specialities is Fishing Trips into the Vestfjord Located in Ballstad ,the middle of Lofoten We also got full camp-site for mobile- home , caravan and tents, Service room , toilet/shower News! this year is SAUNA ON THE PIER
Book
Build: 01/01/2000 00:00:00, Host: online3core18, DB: o3.cbguide-4064.cbischannel-393.v1 online3data04.db.citybreak.com:8080, Controller: Todo, Action: showdetails