In Galleri Lofoten you’ll find everything from pottery signed by Queen Sonja to one of Norway’s largest collections of Northern Norwegian paintings from the 19th century.

Galleri Lofoten is centrally located in Henningsvær, consisting of two floors displaying art spanning a period from the 19th century up until today. The ground floor is dedicated to a large collection of paintings, including works by Otto Sinding, Gunnar Berg, Even Ulving and Adelsteen Normann. These painters are often referred to as «The Lofot Artists», and have been given much of the credit for their Norwegian compatriots discovering the breathtaking scenery of the archipelago. The exhibition features a broad spectre of these artists’ Northern Norwegian motifs as captured by the use of various techniques.

On the first floor of the gallery you will find a section displaying watercolours by the Swedish artist Lars Lerin. He has lived in Lofoten for twelve years and is regarded as one of Europe’s most highly renowned watercolour artists. Most of his pieces on display here have motifs from Lofoten.

HRH Queen Sonja also has an exhibition here. Exemplifying the breadth and variety of her work are pictures in which she has utilised techniques such as lithography, mono-typing, etching, woodcuts and aquatint. The gallery also counts a selection of the queen’s pottery pieces amongst its collection.

Galleri Lofoten was previously called Galleri Lofotens hus, but has since been renamed after the establishment changed hands in 2019. In addition to the art, the gallery also houses a historical exhibition of Henningsvær in bygone times, which includes tools and equipment used in Lofoten fishing.

Galleri Lofoten aims to convey Northern Norwegian history and to show the Lofoten scenery through art. Above all else though, it is a vibrant and family-friendly gallery.

Did you know...
...many of the works in Galleri Lofoten are from the era called the golden age of Northern Norwegian painting?

Galleri Lofoten is situated by the edge of the quay facing Henningsvær harbour. Following your gallery visit you could unwind with a glass of wine at in the in-house wine bar, perhaps accompanied by a delicious platter of cheese from local producer Aalan Gård. Galleri Lofoten regularly hosts concerts and is a cultural arena where the locals come together.

The gallery shop offers a variety of local products as well as art books, postcards and print posters. For more arts and crafts, a visit to 925 Catrine Linder, Kaviarfabrikken and Engelskmannsbrygga would be well worth your while. 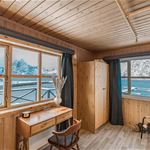 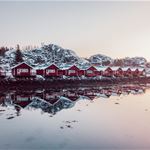 Distance: 10.7 km
Newly renovated cabins with spectacular views of the sea and the Lofoten mountains.
Book 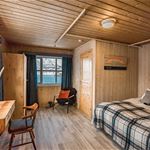 Hotel room at Skårungen AS